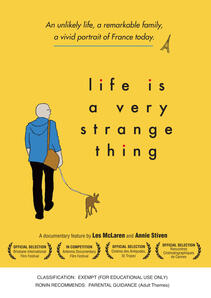 NOTE: The streaming file available on Vimeo-on-Demand through the link on this page is the French language version (with French subtitles for English dialogue).

The DVD includes both English and French sub-titled versions of the film.

A quirky and moving portrait by outsiders, exploring what it is to be French in the 21st century. Frédéric, a former high school rebel, ethnomusicologist, and multinational executive, returns from decades abroad, to a France that is both familiar and on edge.

They had first met Frédéric when he had been a young rebel, and an ethnomusicologist in Papua New Guinea. They had then lost contact but in the intervening years, Frederic had become the executive of a multinational garbage business. After decades abroad he'd returned to a France that is on edge with terror attacks, and shaken by the rise of nationalist politics.

Frédéric is a wily raconteur and collector, and his daily encounters with local characters in Paris and Bordeaux reveal a rich mosaic of life in France today.

We learn about Frédéric's grandfather who had been a colonial governor in Cambodia; and we meet his composer father, Charles Duvelle, whose recordings of traditional African music had helped to found the World Music movement. We also meet Frédéric's niece Elvire, a Femen activist who protests against social injustice and the Far Right.

The film is part road trip, part meditation - a wry and affectionate portrait from an outsider's perspective, with questions of what it is to be French in the 21st century.

The DVD includes both English and French sub-titled versions of the film.

For a streaming file of the English language version see www.roninfilms.com.au/video/858/0/15202.html

"The film crackles with energy, fuelled by Duvelle's irresistible charm and intelligence ... A complex man encapsulated in a film that's impressive in scope yet full of heart as an intimate study of a storied, colourful individual. ... Life Is a Very Strange Thing offers up a feast of a life that has spanned France, Africa and Papua New Guinea."
- John Catania, Metro Magazine, Australian Teachers of Media

"It's become rare for documentary to not be topic driven nor about some crisis; this is as refreshing as a glass of good French wine."
- Judith MacDougall, filmmaker

"I haven't seen such a brilliantly crafted film for a long time. The encounter with the central character and the whole cast of people around him is delightful ... it carries us into the life of metropolitan France today with an intimacy that is thoroughly enjoyable."
- David MacDougall, filmmaker & film scholar, Australian National University

"Thought your film was a very engaging and sophisticated essay. Hard to make a visually sustained film like this, but you did, through terrific editing. Great not to be told what to think and to have such an allusive, rich, cinematically literate film that worked on a number of levels - I particularly liked the way every 'trivial' moment connoted the historical past (personal and/or political). Very French. I thought of Rouch and Morin, 'Chronique d'un Ete', and of Chris Marker. No bullshit. Hope it's widely seen and appreciated."
- Professor Philip Bell, film scholar

"A wonderful, whimsical, humorous and emotionally-satisfying film made with consummate skill. And best of all - it is a real documentary, something we rarely see on TV any more."
- Nick Torrens, filmmaker

"An outstanding resource for educational purposes at tertiary level. The film is of great interest to French Studies colleagues and students as a contemporary snapshot of France's colonial legacy and its complicated present. ... The film is valuable for its cinematic qualities as a film-essay and as an ethnographic study of the social, cultural and political dynamics at play not only in contemporary France but across the post-colonial world. The film is therefore of particular interest to students and staff in the fields of Cinema Studies, French Studies, European Studies, Asian Studies, African Studies, Middle Eastern Studies, Postcolonial Studies, Anthropology, and History. ... (It is) a rich educational tool as well as a fine example of high-quality self-funded independent documentary filmmaking."
- Dr Andrew McGregor, University of Melbourne

"Stunning! An essay film, an ethnography, a biography ... a witty and wide journey about life, family, memory, history and politics and film."
- Dr Jeni Thornley, Issues in Documentary

"An unusually nuanced, subtle, and insightful foray into the cultural politics of contemporary France, as experienced by a local cosmopolitan with a big story to tell. A road movie traversing colonial and post colonial stories from Cambodia to Papua New Guinea, Australia to France, not to mention realities mega-urban to mega-rural, full of revealing twists and turns."
- Steven Feld, Senior Scholar, School for Advanced Research, Santa Fe, New Mexico; Distinguished Professor of Anthropology Emeritus at the University of New Mexico