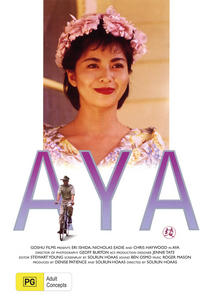 The film begins in the 1950s: life is back to normal for most Australians, but for Aya (Eri Ishida) the conflict is just beginning. She has risked everything by marrying Frank (Nicholas Eadie), an Australian soldier on duty with the Occupation forces in Japan. Facing hostility from her own family, fearing rejection by her new mother-in-law, and facing humiliation from Australian government officials, she joins Frank in her new home in Melbourne.

Over the next two decades, Aya battles to embrace a new country and its culture. As she gains strength and confidence, her marriage to Frank deteriorates into bitterness and violence. Her personal quest for fulfilment leads her eventually to Hobart and the start - yet again - of a new life for herself, but this time in full control of her own destiny.

Aya's story is not based on a particular case, but draws on the experiences of many war brides who made a home for themselves in Australia. Altogether, around 650 Japanese women married Australian soldiers and settled in Australia, and most have stayed. As in AYA, most of their children grew up not speaking Japanese; some women were even forbidden to speak Japanese to their children, as their husbands were worried about their children's assimilation.

'Japanese women are portrayed in western cinema as gentle, chaste and elegant - an approach which has a kind of fairytale-like nostalgia about it, but which also conveys a lack of self-reliant individuality and in this sense is faintly derogatory ... The Australian film Aya (l991) which broke away from these stereotypes and pointed the way to a new direction deserves to be noted.... [Aya] is an ordinary woman found anywhere, portrayed attractively and above all, with realism ... Japan changes but stereotypes remain." - Tadao Sato, Cinemaya No. 17-18, 1992-93 (p. 63).

" Unlike other directors who have attempted films about bicultural couples and got only one partner really right, Hoaas knows both sides of the cultural equation. By the end of the film, we not only like Aya, with her gutsy charm, but feel that we know her. She is at once a very typical Japanese and a uniquely international individual ... Aya views a cultural chasm." - Mark Schilling, The Japan Times, February 11, 1992.

Other Solrun Hoaas films available from Ronin Films are: PYONGYANG DIARIES, RUSHING TO SUNSHINE, GREEN TEA & CHERRY RIPE, AT EDGE and THE HATOMA COLLECTION [Sacred Vandals, The Priestess/The Storekeeper, Waiting for Water and There's Nothing That Doesn't Take Time].