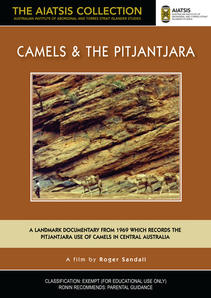 From the 1920s onwards, when motor vehicles displaced camels as a mode of supply in central Australia, camels gradually went feral. As this film shows, however, in the 1960s, the Pitjantjara were making good use of camels to facilitate their travels and connections with other areas.

This remarkable film, shot in 1968 (released in 1969) follows a group of Pitjantjara men, led by "Captain", a veteran cameleer, who travel out from their base at Areyonga Settlement, to capture a wild camel, tame it and add it to their domestic herds. They then use camels to help transport a large group of people from Areyonga to Papunya, three days' walk away.

This film departs from the usual emphasis of the AIAS films in the 1960s on recording ceremonial life and traditional craft skills. It is instead a beautifully photographed observation of daily activities in the lives of the Pitjantjara and their camels. The film also touches on the malaise of life at Areyonga, where the men are generally bored: "yesterday's skills are meaningless" in the Settlement where food and necessities are generally supplied.

Unlike much of Roger Sandall's specialist ethnographic film work for the AIAS, this film was made for a general audience, although still retaining serious ethnographic intent. The young anthropologist, Nicolas Peterson, initiated the idea for the film, and assisted Sandall in the production.

The film is a significant reminder of Sandall's skills as a filmmaker, his great eye for evocative images, and his patient attention to detail as a story-teller.

Note that the film is narrated in English. Passages of dialogue in Pitjantjatjara language are not translated.

Note also that the word "Pitjantjara" in the main title is an early form of the modern term "Pitjantjatjara".