MALBANGKA COUNTRY [from the AIATSIS Collection] 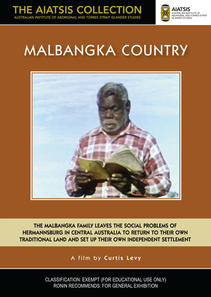 Gustav Malbangka and his family lived at Hermansburg Mission in central Australia. Like many other people, they wish to leave the social problems of the congested settlement behind them and return to their traditional land at Gilbert Springs. The film depicts their attempt to carve out a more satisfactory life for themselves, drawing strength from being in the homeland again.

Gustav reflects on his early life, raised on the Lutheran Mission at Hermannsburg and schooled there. As Hermannsburg grew in size, it attracted people from a diversity of tribal groups, and social problems developed. Encouraged by the "out-station movement", many people like Gustav left the Mission to return to their traditional country, leaving Hermannsburg looking "like a ghost town".

Life at Gilbert Springs is not easy: until bore water is provided, everyone has to live close to the Springs in bush shelters. Gustav, however, has plans to build houses with running water, and to establish a viable station with a church and a school, growing produce and raising cattle. But for the moment, they are dependent on a weekly visit from a travelling "store truck" and have their financial affairs managed by the truck's operator, Murray Pearce.

Although a challenging film to make, with little overt action, it is a poignant portrait of a small group of people trying to create a new life for themselves by returning to traditional ways, and trying to maintain their vision for the future despite dependence on outside services and government grants. As a small case study of the challenges faced by communities in the out-station movement, the film is also a valuable historical record.

The film is narrated by Gus Williams, a member of the extended Malbangka family, and a well known Country and Western singer, and father of Warren Williams.