MOURNING FOR MANGATOPI [from the AIATSIS Collection] 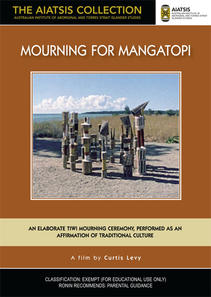 Because of work commitments and the influence of Christian Missions, traditional mourning ceremonies among the Tiwi people of Melville Island were becoming rare at the time of making this film (1974). The full, elaborate ceremony, called the Pukumani ceremony, lasted several days and involved large numbers of people in ritual roles. It was performed here with full awareness that this may be one of the last times such a ceremony would be staged in the traditional way.

The ceremony was prepared by the Mangatopi family of Snake Bay after the death of a 35-year old family member killed by his wife. The dead man's father, Geoffrey Mangatopi, and his family requested this film to be made as a public record of a disappearing tradition. Unique to the Tiwi people of Melville and Bathurst islands, the Pukumani ceremony was not only performed to safe-guard the passage of the dead person into the spirit world, but to re-affirm kinship relationships and traditional Tiwi culture.

In 1974, about 1500 Tiwi people lived in European-administered communities on Melville and Bathurst islands. Being geographically isolated, the Tiwi were less subject to other Indigenous cultural influences. Although resistant to white settlement at first, they subsequently adapted to the presence of Europeans. Yet for many Tiwi, Christian funerals failed to ensure the ritual journey of the dead to the spirit world, and failed to provide the emotional release that the Pukumani ceremony offered.

Traditionally, women participated in all aspects of the ceremony (unlike women in many mainland tribal ceremonies). Elaborately decorated burial poles were prepared and were the focal point of the ceremony. Food taboos and other restrictions on behavior were intended to control the approach of supernatural forces. Body painting, dancing, re-enactment of past events, feasting and ritual cleansing were all essential parts of the ceremony, designed to ease the path of the spirit. Each kin group has their own dance, rehearsed and performed over several days, defining relationships and re-affirming them.

Shot in classic observational style, with great attention to detail, and often humorous, the film became widely seen in anthropology studies, and was screened publicly in many venues around the world.