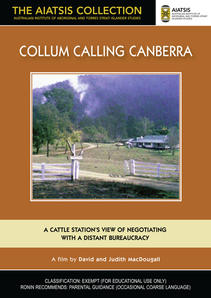 Gordon Smith, head of the Collum Collum Aboriginal Co-operative which operates a cattle station in northern New South Wales, and Sunny Bancroft, the station manager, are negotiating with the Aboriginal Development Corporation in Canberra for a loan. Finance is needed to stock the property with breeding cattle so that the station can become financially independent.

The film details the frustrations of negotiating with a distant bureaucracy while, at the same time, trying to manage the property and make it a viable business.

The negotiations take place mainly by telephone with occasional visits from ADC representatives. Sunny's wife, Liz, is in charge of the homestead and hospitality whenever a visitor calls. Sunny meanwhile has to deal with training the station hands, maintaining fences, and managing the cattle that are currently held.

After much stone-walling by the ADC, frustrations and paper-shuffling, approval for the finance is given but then it takes even more time for the money to flow.

This fascinating observational documentary documents relationships within the Aboriginal community of Collum Collum as well as the power structures imposed by outside forces.

It is one of four documentaries that the MacDougalls made at Collum Collum. See also SUNNY AND THE DARK HORSE, A TRANSFER OF POWER and STOCKMAN'S STRATEGY.