TALES FROM THE DALY - Nauiyu Nambiyu [from the CAAMA Collection] 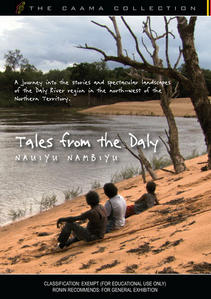 In the Monsoon season, the Daly River region is lashed by savage storms which bring the landscape and river to life. Legend says it is the Sugar Glider traveling across the sky mischievously moving the clouds around, which brings the rain. But amidst the tropical beauty lies danger.

Stories about the monsoons and the river have been told to children for generations, to teach them to have respect for the bush and to be wary of its dangers. The Wabuymem is one of these stories.

This reconstruction of Wangung's story evocatively captures the full power and visual richness of the stormy wet season. The filmmaker, Steve McGregor, has been making films in the Daly River region for 15 years and has been associated with the area through his wife who comes from the region.