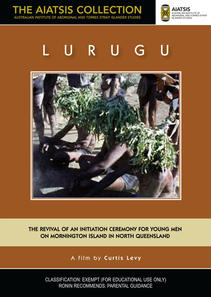 Made at the request of the people of Mornington Island, this film was the first of five made by Curtis Levy for the Australian Institute of Aboriginal Studies (now AIATSIS).

"Lurugu" is the name of an initiation ceremony that had almost died out on Mornington Island (in the Gulf of Carpentaria in north Queensland) after mission contact during World War One. This film records the community's efforts to revive the ceremony after a lapse of 14 years.

Before white contact, all youths were required to undergo Lurugu, which was the first of two ceremonies for making men. In the old days the ceremony lasted months. Now, work obligations and other stresses of living in the Western world meant that the ceremony was shortened to only one week.

At the time of filming, about 600 people lived at the Presbyterian Mission on the island, and over half of the population belonged to the Lardil tribe. The Mission staff were invited to observe public sections of the ceremony, along with other visitors including Percy Trezise, a pilot, author and Aboriginal art expert, who had become a close friend of the community.

Two versions of the film were made: a longer film detailing the whole ceremony as an archival record for authorised community members, and this public version which focuses on sections of the ceremony suitable for a general audience. The film follows the preparations for the dancing, singing, feasting and body decoration that were an integral part of the ceremony.

Dick and Lindsay Roughsey (both of the Lardil tribe) were among those responsible for this attempt to revive the Lurugu ceremony, as part of a wider return to "traditionalism" in northern Australia, and the film follows their negotiations with tribal members and other groups about how the event is to be managed and performed.

Influenced by observational filmmakers like the Maysles brothers, Donn Pennebaker and others, Curtis Levy constructed the film without added music, and with an unstructured approach to following events unobtrusively with the camera, rather than trying to control them. The result is a lively portrait of a social experiment and the excitement that went with it.