HABITS OF NEW NORCIA, THE 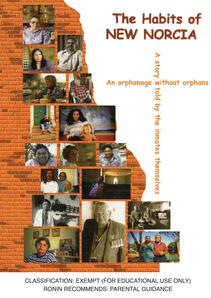 Re-release of a remarkable documentary from 2000, commissioned by the progressive SBS Independent: the story of the Benedictine Aboriginal Mission at New Norcia, in Western Australia. Now a popular tourist destination north of Perth, the Mission holds harsh memories for the former Aboriginal "inmates" who were placed there during the 1920s through to the 1960s.

The stories in The Habits of New Norcia are told by former Western Australian Aboriginal child 'inmates' of the New Norcia Benedictine Mission who were separated from their families in the 1940s, 50s and 60s and confined in this "orphanage without orphans".

In recent decades the New Norcia Monastery has been packaged as one of the State's leading cultural tourist attractions. "A unique blend of Spanish architecture, European art treasures and pioneer history," "Monks, Music & Mystery," "New Norcia, Australia's only monastic town," the brochures announce. Aboriginal testimony in the film challenges this revised and sanitised history. The documentary provides damming evidence of the continuing violence of the Mission against its victims by deliberate omission of their experience in the New Norcia museum, guided tours, art gallery and promotions — an omission that represents a cruel and wounding cover-up. Noongars who gave their testimonies for The Habits of New Norcia and wanted to put the record about the New Norcia Benedictine mission straight.

Noongar testimony in this film challenges the story polished for tourism, with a vivid and intimate understanding of daily life in the 'orphanages'; what is was like to be taken from family by welfare officers and police, often with violence or deceit, and isolated in a place where "no one really wanted you"; to suffer the rigid controls, physical and emotional violence and threats of damnation; to be taken from so-called neglect and to be neglected.

On launching the film Sir Ronald Wilson (head of the National Inquiry into the Forced Removal of Aboriginal Children from their Families) remarked on the 'courage' of those who told their stories; acknowledged the "pain and distress" that memories of their experiences caused them; admired the 'trust' and "generosity of spirit" which members of this stolen generation showed in sharing their experiences; and stressed the importance of telling these stories for both the personal and community process of "healing".

Sir Ronald concluded: "There is continuing pain being derived from the absence of a show of generosity of spirit and a true regard for history from the New Norcia authorities in their efforts to survive in this economic rationalistic day, and to see that for survival in terms of tourism, they are spreading a history of the monastery that leaves out the chapter that you are going to hear today."

Former child inmate, Alf Taylor, said, "I can tell now about New Norcia and not feel a pang of whether I, you know, I shouldn't do this because God might come down and send me to hell."

In the news still in 2021: thewest.com.au/news/up-late/up-late-with-ben-harvey-why-new-norcia-was-a-paedophile-paradise-c-3962905

"Monks, Mammon and mystery" by Victoria Laurie, in The Australian Magazine, 3-4 June 2000, pp 20-23. See link below to download a PDF of this excellent article.