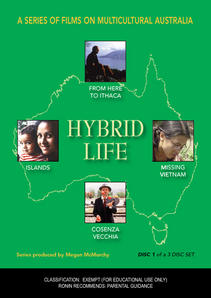 Vincent Heimann grew up in Melbourne, the son of a German father and Samoan mother. He grew up with no real ties to the Samoan Islander community, unlike his cousins in Sydney who were raised with its language, customs and religion. "My research materials comprised anthropological studies, romanticised island paperbacks and package holiday brochures. I knew I had to look back into my own past to discover where I was placed within the culture." - Vincent Heimann.

FROM HERE TO ITHACA

Fionn's father, Dionysis, is Greek and came to Australia as a migrant in 1949. He met Jean, an Irish-Australian at a communist youth camp in Melbourne, they subsequently married. When Dionysis decided to return to Greece in 1986, his family remained in Australia. Ithaca is a special place for Fionn and, like many of his ancestors, he struggles to make his own connection to the place.

This story begins in Saigon in April 1975, three weeks before the end of the war. 'Operation Babylift', supervised by the Australian government, transported 292 Vietnamese orphans to Australia, including eight-month-old Leigh. She was adopted by a family in Grafton who already had five children. Now armed with the tag which was attached to her foot, a photo and a letter, Leigh returns to Vietnam in search of her Vietnamese parents.

In search of a relationship between his work as an artist and his family's political convictions, David discovers his anti-fascist grandfather, Louis Stellato. Louis fled Italy in 1927, stowing away on a ship bound for Australia and leaving behind his parents, wife and two children. They were not reunited until 1931, in Melbourne. The story slips back and forth in time, from the night of Louis's escape from Italy to David's visit to Cosenza, the family's home town. COSENZA VECCHIA looks at how often nostalgia is used by the children of migrants to justify their actions in the present.