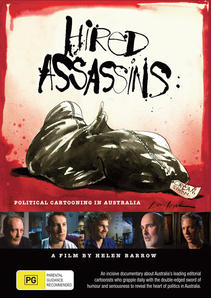 Australia's political life as seen through the eyes of five editorial cartoonists: a documentary that takes us from the children overboard to the War in Iraq. Bill Leak, Geoff Pryor, Rod Emmerson, Warren Brown and David Rowe take us into the world of daily newspapers, political cartooning and the struggle to satirise a maelstrom of events that they each try to distill with their own brand of humour. They perform the role that Socrates chose for himself: "a stinging gadfly on the rump of the social animal".

The Australian, the Daily Telegraph, the Australian Financial Review, the Canberra Times and the Morning Bulletin in Rockhampton represent different readerships, different editorial demands, and different cultures. All of these newspapers employ cartoonists to provide humour, entertainment and illustrations for their pages. From this privileged position, the editorial cartoonist's pen can be a devastating weapon that pricks pomposity in the powerful and evokes sympathy for the exploited and down trodden. Often what they say is more poignant and honest than the political observations that sit on the page next to the cartoon.

This documentary takes us behind the scenes at newspaper offices and into the minds of some of the best political and editorial cartoonists currently working for Australian newspapers. These are people who have the courage to say out loud what people are thinking and fearing. Against the pressure of deadlines their work requires nerves of steel and a certain kind of attitude and mentality to produce a constant flow of provocative, exciting and entertaining cartoons, every day, every week, for years on end.

HIRED ASSASSINS was filmed over a six month period during a time of confronting domestic and international political events that challenged the people of Australia. Filming commenced in October 2002 when Australia was still mourning the loss of life after the Bali Bombing. The sense of uncertainty was compounded by a fear of terrorism on the domestic and international fronts. Against this backdrop, the role that the Howard government played in the children overboard incident was brought into question by an official inquiry. Filming continued throughout the following six months as terrorism took centre stage and Australia joined the United States' "Coalition of the Willing". The five cartoonists were confronted with significant political issues on a daily basis to which they felt compelled to respond both personally and professionally. The documentary concludes at a dramatic time for editorial cartoonists as they are both challenged and at times overwhelmed by the events as Australia participated in the war against Iraq in March 2003.