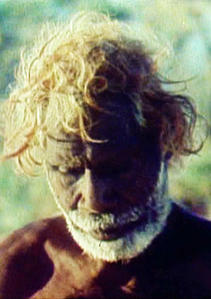 Only available in the ASPECTS OF A LIFE collection.

This passage is taken from the booklet that is included in the ASPECTS OF A LIFE collection:

The tribal circles of elders of the Wunan lore and law were specific with their brief and I found myself enlisted as their 'whitefella film man'. Unlike the companion film LALAI DREAMTIME the task requested was to use film as a means to hold up a mirror to the younger generation, who at that time had left behind their Aboriginal traditions and culture. The intention was to make a direct appeal to their sons and daughters. The elders said that by not listening to ancestral Wandjina wisdom and the lore passed down by them, the younger generation would wander, FLOATING ... like wind blow'em about.

In fact this brief and its expectation was an eloquent solution to a problem. These elders had successfully managed to balance both world views, the Western world view and their own traditional Aboriginal one. They realised they had no alternative but to use the medium of film.

The film was too confronting for Australians and so had limited distribution in Australia during the 1970s. In an endeavor to find a broader audience, to make public the travesty for our First Nation Australians, I went to the 1978 Berlin Film Festival. Not only was I welcomed, but the films were highly commended. Several exceptional German filmmakers made themselves known to me, first because they considered this was their festival and secondly because these films of an ancient peoples and the Kimberley stood out. Noted director Werner Herzog invited me to Munich where he wanted the films to be screened. Leading up to this special screening Herzog with his wife wrote the following review in Su Deutsche Zeitung, Munich, 1st April, 1978:

"For me, the most interesting film is "Floating" by Michael Edols. It deals precisely with the collision of the white's lack of history with the black's prehistory. The director has simply presented images, without comment, but with intensity and insight – images of destruction. Every one of them, however fleeting, reveals a tragedy. The frail and questionable nature of white technological civilisation, the planes, the sirens, the bars, the hymns on the mission, everything.

Faced with all this, the pre-historic has no chance of survival and it hurts to be an onlooker. Not that it makes you yearn for a state of natural, innocent primitiveness. For though the Australian Aboriginals are indeed prehistoric and by our standards primitive, when you realise that their culture is a highly complicated one, with an extraordinary mythology and a world view in which people, objects, time, the dream-time and especially dreams are still one. Seen from this point of view, it is our civilisation which is shattered. And we harbour the secret hatred of the alienation. We destroy cultures, animal species die out; but here a rare human possibility is being swept from the face of the earth, a whole rich culture. With it goes our own pre-history, which we ourselves lived for 50,000 years and which somewhere deep within us we still presumably carry. We are the poorer."

Only available in the ASPECTS OF A LIFE collection. - follow this link for purchase of this title - www.roninfilms.com.au/feature/6507/aspects-of-life-working-with-indigenous.html