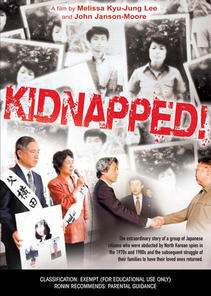 The extraordinary story of a group of Japanese citizens who were abducted by North Korean spies in the 1970s and 1980s and the subsequent struggle of their families to have their loved ones returned.

From the early 1970s to the mid-80s, scores of ordinary Japanese disappeared without a trace, many of them from beaches and remote villages along the Japan Sea coast, others from Tokyo, London and Madrid.

After decades of speculation, it was finally revealed in 2002 that these ordinary Japanese citizens had in fact been abducted by North Korean spies as part of a bizarre and sinister plot of espionage by the hard-line, communist dictatorship of Kim Jong Il. From the last front of the Cold War to the new battle against the 'Axis of Evil', Kidnapped! tells the extraordinary story of the Chimura, Yokota and Arimoto families – some of the unfortunate victims of a terrifying abduction campaign by North Korea, who are now unwittingly caught up in the eye of a political storm.

The story of these families in their search for truth unveils a tangled web of political manoeuverings and international espionage. Kidnapped! is an emotional and uncompromising journey into one of the most controversial issues in Japan today. It is a powerful story of ordinary Japanese citizens who are perhaps the last casualties of the Cold War and who have become pawns in a diplomatic chess game of life and death.