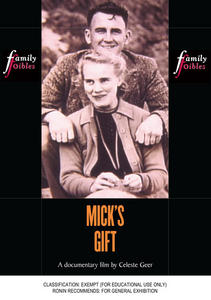 The late Mick Hudson was an adventurer, inventor and 16mm film addict who seems to be remembered differently by everyone.

Celeste's memories of her grandfather Mick are the idealised memories of childhood. She has inherited the filmmaking bug from Mick whose lost footage of New York, Papua New Guinea and Melbourne in the 1940s and 1950s she recently discovered.

As Celeste sets out to find the 'real' Mick through his film footage and the memories of her family, less glamourous and sometimes contradictory images emerge which lead us to question the way family memories get tailored for the consumption of future generations.

The other 4 episodes in the FAMILY FOIBLES series are: KIM & HARLEY & THE KIDS, MY MOTHER NANCY, THE WOODCUTTER'S SON and UPSTAIRS DOWNSTAIRS.