COMPLAINTS OF A DUTIFUL DAUGHTER 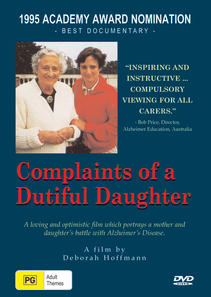 With profound insight and a healthy dose of humour, COMPLAINTS OF A DUTIFUL DAUGHTER chronicles the various stages of a mothers Alzheimers Disease and the evolution of a daughters response to the illness. The desire to cure the incurable - to set right her mothers confusion and forgetfulness, to temper her mothers obsessiveness - gives way to an acceptance which is finally liberating for both daughter and mother.

COMPLAINTS OF A DUTIFUL DAUGHTER is far more than a story about Alzheimers and family carers. It is an exploration of family relations, ageing, the meaning of memory, and the tenacity of love.

The first time my mother asked me how exactly is it that we were related I was really shocked. I didn't know what to say. I was ashamed to just say I'm your daughter. I was afraid that if I did, it would upset her terribly to realise that she had forgotten. So I made a guessing game and I gave her some clues. Eventually I gave her enough clues that she got it and she said, 'Oh, you mean I'm your mother!' Then she thought for a moment and added, 'I never thought of it that way before.' - Deborah Hoffman.

"A beautifully crafted and moving story about Alzheimer's Disease from a daughter's perspective ... an intelligent film which is not a story of despair but of acceptance." - Pam Hawkins, Alzheimer's Association, NSW.

"This is the best film about Alzheimer's disease that I've seen, and I've seen quite a few...I too would have nominated Complaints of a Dutiful Daughter for one of the year's best documentaries." - Gene Siskel, Chicago Tribune.

"Unflinchingly honest...a film that will give hope to Alzheimer's caregivers as well as early-stage Alzheimer's patients." - Marcia Freedman, American Society on Aging.

"Hoffmann has made a loving, optimistic and authentic film about her mother, and the struggles to adjust to the changes wrought by Alzheimer's disease" - William Fisher, Alzheimer's Association, Greater San Francisco Bay Area Chapter.