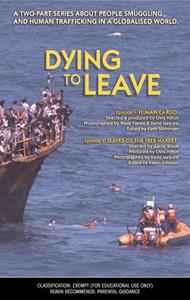 EPISODE 1: HUMAN CARGO - HUMAN CARGO examines the dramatic increase in illegal smuggling of people, usually involving the voluntary passage of those in search of better economic or social conditions. It tells the story of Faris Kadhem from Iraq, stateless for 21 years, who lost his wife and daughter at sea when their overcrowded boat sank while trying to reach Australia. It investigates the continuum of governments' inability to offer real sanctuary to people like Faris.

Henry Zheng, from Fuijian Province in China, is an economic migrant, in search of a better life in America. He survived a perilous journey with a hair-raising route over the Mexican border. But for young Fujianese like Henry, pursuing the dream of making good money can be a nightmare as they spend years working to pay back their smuggling debt which is now as high as AUD $100,000.

A dream becomes a nightmare when Nina Matveyenko, from Moldova, a once privileged republic in the former Soviet Union, finds herself the victim of a bogus smuggling network. The end of the cold war resulted in freedom of movement for people from the former Soviet Republics and the ability to seek new lives elsewhere. But with increasing border restrictions, people need to turn to smugglers, making them vulnerable to ruthless exploitation at the hands of traffickers, the modern day slave traders.

EPISODE 2: SLAVES OF THE FREE MARKET - SLAVES OF THE FREE MARKET explores human trafficking - smuggling activity that includes a new find of indentured servitude where impossible debt is combined with brutal working conditions. Migrants are trafficked by the hundreds of thousands into the world's sex industry each year and increasingly they are also being enslaved in agriculture and construction. This episode continues the story of Nina Matveyenko, charting her terror upon realising she has been sold into prostitution and, after three years, her eventual escape from torment.

Antonio Martinez' journey from Mexico charts the well-worn passage of illegal migrants over the US border. But with stricter border controls, the death toll and the price of passage have risen, resulting in migrants taking increasingly remote and dangerous routes through the desert. As a result, debt bondage, human trafficking and slavery have also complicated smuggling in the southwest. Antonio finds himself sold as an agricultural labourer and enslaved in the world's richest nation.

The involvement of organised crime networks such as the Japanese Yakuza and their expansion across international borders and into the highly profitable trafficking of humans is charted in the story of Marcela Palacios. Recruited in Colombia to work in Japan as a house maid, Marcela became enslaved and forced into prostitution to pay off a fictitious five million yen (AUD $60,000) debt before making a desperate escape.