TRANSFER OF POWER, A [from the AIATSIS Collection] 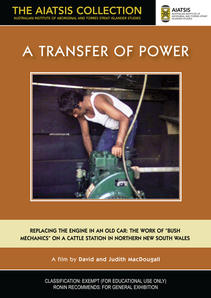 This observational documentary follows an episode in the routine life on Collum Collum cattle-station in northern New South Wales. But, as the filmmaker notes, it's a story that could have occurred anywhere.

The film follows the attempts by Sunny Bancroft and other men in the Collum Collum Aboriginal community to remove a failed engine from a car and replace it with a refurbished engine from another car. It's a familiar rural task where the expectation is to keep motors running, but for these Aboriginal men, it's also an occasion to affirm continuing community relationships.

Sunny regards himself as something of a "bush mechanic". Replacing the engine calls for a gathering of men and children "to see what happens". It's a time for "common sense" but also communal effort, and the calling in of local experts when needed.

In the words of Ian Bryson, in his book Bringing to Light (Aboriginal Studies Press, Canberra, 2002): "In this film more than any other, the MacDougalls manage to describe visually how Aboriginal kinship obligations in this part of Australia are established and enacted."

This film is one of four documentaries that the MacDougalls made at Collum Collum. See also SUNNY AND THE DARK HORSE, COLLUM CALLING CANBERRA and STOCKMAN'S STRATEGY.

Thanks to Collum Collum Aboriginal Corporation