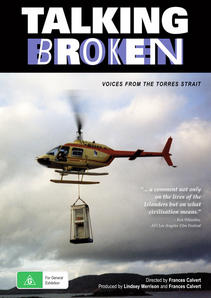 The Torres Strait Islanders are Australia's 'other' Indigenous minority. They remained virtually unknown until 1988 when they made their brief claim for independence. Since first contact with whites in 1871, they have been controlled by benign but effective colonisers, which has left these islands between Papua New Guinea and the tip of the Cape York Peninsula curiously poised between the First and Third Worlds.

TALKING BROKEN is a portrait of these Islanders which goes beyond a description of colonialism. The 'broken' of the title refers to Broken English, a pidgin spoken only by the Torres Strait Islanders. It also pinpoints another major problem experienced by most Indigenous cultures. Although they appear to keep up with 'the system', the hidden language of authorities from the mainland means that it is almost impossible to overcome welfare dependence.

TALKING BROKEN is the result of three years research. Based on a relationship of friendship and trust, several Islanders talk with humour and intelligence about subjects as wide-ranging as independence, culture, tourism, sex, adoption and sorcery. The filmmakers were allowed to enter the Torres Strait reserves and filmed for two months with the support of many individual island communities. The film is a record of the encounter.

"An outstanding film which rises above being only anthropological and becomes a comment not only on the lives of the Islanders but on what civilisation means." - Ken Wlaschin, AFI Los Angeles Film Festival.