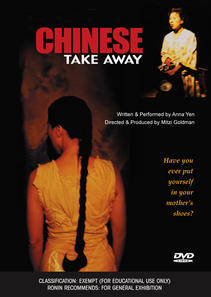 Performer/writer, Anna Yen, in seeking to understand a family tragedy, unravels stories about her grandmother, her mother and herself. The film moves from China in the early 1900s, through Hong Kong in the 30s, suburban Sydney in the 60s, and into the present day. CHINESE TAKE AWAY tells a deeply personal story about strength, loss and transformation that resonates universally.

CHINESE TAKE AWAY is a development of themes explored in all of Mitzi Goldman's previous work, albeit in a new direction. Goldman's documentaries have all dealt with issues of personal history and cultural heritage. Best known for HATRED which won the ATOM Award for Best Social Issues Documentary (1997), her other films include *PORTS OF DESTINY, *PARRA, THINGS I CALL MINE and *SNAKES AND LADDERS. In adapting the stage play CHINESE TAKE AWAY, Goldman has explored cinematic language in a more dramatic way than in previous work, without sacrificing either its documentary or theatrical roots.