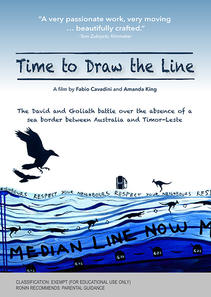 An arresting and beautifully-shot account of the less-than-distinguished elements of Australia's historic relationship with Timor-Leste. Combining interviews with Australian activists and supporters of Timor-Leste, documentary footage, and skilfully woven historical narrative and legal analysis, the film presents a compelling case for a just and moral resolution to the maritime boundary issue". - Hannah Loney, Lecturer in Politics, Australian Catholic University

"In The Hague, the first steps have been taken towards a resolution of the long-standing dispute between Australia and East Timor over the sea boundary between them. A Time to Draw the Line is a richly documented history that is as relevant as ever for the context it provides for this on-going saga." – Dr Andrew Pike, September 2017

The world fell in love with East Timor when it was born as a new nation after 24 years of occupation and war. Australia's International Force for East Timor (INTERFET) supported the Timorese to secure peace, following the 1999 carnage.

Yet the chilling story of Australia's relationship with this new nation must be told, almost two decades later.

At issue are negotiations over a maritime boundary in the Timor Sea, an area rich in oil reserves. East Timor wants the boundary to be drawn at the median line, in accordance with international law, half way between the two countries.

Time to Draw the Line is an emotional study of Australia's long connection to East Timor revealing a chequered relationship of friendship and mistrust.

The film presents the campaign for a fair go for East Timor and that nation's desire to settle its long-running maritime boundary dispute with Australia. Interviews include those Australians who are on the side (of the line) of the East Timorese and on the right side of history.

Time to Draw the Line is directed and produced by Amanda King and Fabio Cavadini with Associate Producers Ines de Almeida and Janelle Saffin.

In March 2018 Timor Leste and Australia signed a treaty agreeing a permanent maritime border to close the Timor Gap.

In April 2019 the treaty had still not been ratified by Australia, denying Timor Leste millions of dollars in oil revenue.

The following article by Helen Davidson in The Guardian of 16 April 2019, identifies that Australia and Timor-Leste have signed the new maritime treaty which gives the median line boundary between the 2 countries - also giving T-L 100% of oil revenues. Yet because the treaty's not ratified by Australia this hasn't happened!

"Time to Draw The Line' is essential viewing for understanding how the extraction of resources has, time after time, usurped our morals." - Damon Gameau, actor 'Balibo', 'That Sugar Film'

"It's fantastic. A strong argument, but also a terrific study of a period of history too. Congratulations, it is a very significant work on this issue." - Robert Connolly, director 'Balibo', 'Barracuda'

"it is a story of one of the most wealthy (and resource rich) nations on earth fighting tooth and nail to prevent one of the newest and poorest nations on earth gaining control over what (by international law and by moral due), are Timor-Leste's oil and gas reserves. I highly commend this excellent film." - Dr. Adam Hughes Henry, Visitor in Human Rights, Human Rights Consortium, School of Advanced Studies, University of London; Visiting Fellow School of Culture,History and Languages, Australian National University

ALSO INCLUDED ON THE DVD (and highly recommended as a short film to precede screenings of TIME TO DRAW THE LINE): the outstanding animated documentary, JOSE'S STORY (7 mins, 2013). Australian animator, Wendy Chandler, went to East Timor in 2011 to give animation workshops for local filmmakers, and began to collaborate with the East Timorese filmmaker, Jose da Costa, on the making of this short film, narrating the turbulent history of his life. Jose had witnessed half his family die of starvation, his murdered father's body hanging from a tree, the 1991 massacre at the Santa Cruz cemetery, and had been imprisoned and tortured by the Indonesian military. In 1995 at the age of 18, Jose arrived in Darwin on a leaky boat with 17 fellow refugees from East Timor. He now lives in Dili and is finally free to tell his inspiring story of hope, resilience and survival. Directed by Wendy Chandler, produced and written by Wendy Chandler & Jose da Costa.