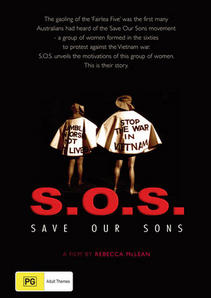 "'OUR MOTHER IS A POLITICAL PRISONER' was blazoned across the placards we held outside the prison gates. They called my mother 'the blonde bombshell'. It was Easter 1971." - Rebecca McLean, director

This documentary explores the history of the Save Our Sons Movement of Victoria - a group of women formed in the sixties to protest against the Vietnam War. Energetic and informative, an extraordinary episode in the anti-conscription and anti-Vietnam War struggles of the 1960s.

The gaoling of the 'Fairlea Five' was the first many Australians had heard of 'Save Our Sons'. Yet, since 1965, these women had been putting on their hats and gloves and carried their blue and white banners high - to the army barracks; to court; to Parliament House; to the City Square; and even, in 1969, to Vietnam. 'Vietnam' which, to a whole generation, was synonymous with 'War'.

Though not directly a part of the 'radical' youth counter-culture, these women educated themselves and others on the situation in Vietnam and on the laws associated with conscription and conscientious objection. In the process, their politics became increasingly radical. Proving that 'the personal is political', these women had slipped out of their 'hats and gloves' and into jeans and mini-skirts. Where once they had remained silent, they now spoke out about the war as 'slit-gut and rape' of a people.

This is a filmmakers journey through the sixties, a period full of complexities and contradictions. SAVE OUR SONS (S.O.S.). unveils the motivations and real experiences of the Save Our Sons women. What is crucial, above all, is the inspiration and sense of possibilities for political activism that these women - our foremothers - leave us with.

See article by Carolyn Collins, "Gloves Off" in Inside Story, 5 June 2021: insidestory.org.au/gloves-off/

Recommended reading: Carolyn Collins, Save Our Sons: Women, Dissent and Conscription during the Vietnam War, published by Monash University Publishing, 2021