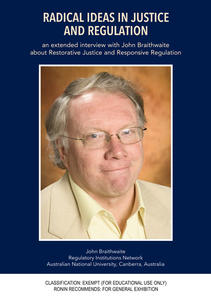 Restorative Justice and Responsive Regulation are policy ideas that have spread widely in the 21st century. They are about the notion that because crime hurts, justice should heal. Because injustice causes great pain, it is more important to fix it than punish it. That said, these policies leave a strategically important place for deterrence in crime control, the control of school bullying, business regulation and peacemaking in international affairs. In this film, John Braithwaite explains how we can make wise choices about whether to punish or persuade.

Whether the challenge is to regulate climate change, crime, or war-making, responsive regulation helps us organise a mix of regulatory strategies to tackle the problem. Because most regulatory strategies fail most of the time, we must learn to fail fast, learn, and adjust to a different regulatory strategy. Because people need to learn to work together again after terrible tragedy or wrong-doing, acknowledging shame, repairing the harm and restoring relationships are also critical.

John Braithwaite is a Distinguished Professor at the Australian National University. He is a criminologist and scholar of peace-building and business regulation. He is best known for his work on restorative justice and responsive regulation. Professor Braithwaite was an inaugural Federation Fellow in Australia and won a second Fellowship from 2007. His work has also won many prizes from US and European scholarly societies, including the Grawemeyer Award for Ideas Improving World Order for his work with Peter Drahos on business regulation, the Sutherland Award of the American Society of Criminology, the Prix Emile Durkheim of the International Society of Criminology, the Kalven Prize of the Law and Society Association, the first Stockholm Prize in Criminology, the Future Justice Prize and an honourary doctorate from Leuven University in Belgium.

Braithwaite founded the Regulatory Institutions Network at the Australian National University. He was an author of the "Braithwaite Report", Raising the Standard: Resident Centred Nursing Home Regulation in Australia, in 1993. His nursing home work was central to his 1992 Oxford University Press book, Responsive Regulation, with Yale Law Professor Ian Ayres. His restorative justice ideas are best captured in his 1989 book Crime, Shame and Reintegration and his 2002 work Restorative Justice and Responsive Regulation.

From 1983-1987, Braithwaite served on the Economic Planning Advisory Council, chaired by the Prime Minister of Australia. From 1985 to 1995 he served as a Commissioner on Australia's national antitrust and consumer protection agency, the Trade Practices Commission (now the ACCC). He has been an advisor to many government agencies, to the United Nations and other international agencies. For more than 40 years he has been active in social movement politics.

Click on "restorative justice", "responsive regulation", "peacebuilding" and other topics to find free downloads of many John Braithwaite publications at: www.anu.edu.au/fellows/jbraithwaite/pubsbysubject/index.php