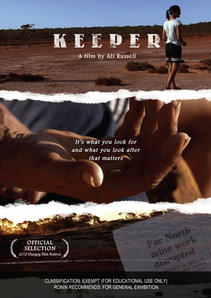 Keeper is the story of two Aboriginal women living in the small town of Ceduna on the far-west coast of South Australia. 15 year-old Jacinta Haseldine is a high school student, as interested in hip hop as she is in hunting wombats and kangaroos. Her Nana Sue, born and raised on a mission, has always taken Jacinta out bush to teach her to find medicinal plants and take care of sacred waterholes.

When more than 20 mining companies start drilling nearby for gold, uranium and mineral sands, Jacinta and Sue's family is bitterly divided over million-dollar Native Title deals. For Sue, who spent her childhood running away out bush to escape the welfare authorities, and Jacinta, a teenager who just wants her family to stay together - growing up means many different things.

Keeper tackles one of the most difficult and publicly under-discussed features of contemporary Aboriginal experiences across Australia: the destabilising and frequently painful effects of the Native Title process.