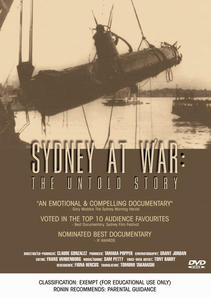 At midnight on Sunday May 31, 1942, three Japanese midget submarines broke through Sydney Harbour's defences and launched a surprise attack on an ill-prepared city. During that night of confusion and violence, 21 Australian and 6 Japanese service personnel lost their lives. Sydney At War recounts the events of that fateful night.

Director Claude Gonzalez had always been interested in Sydney folklore and this particular story from Sydney's recent past had never, he believed, been fully explored. "Over the years I'd seen a lot of news reports about the incident but it wasn't until I actually met one of the survivors from the Kuttabul, Neil Roberts, that my interest was sparked."

Sydney At War: The Untold Story interviews remaining survivors of the mission - both Australian and Japanese - as well as family members of the Japanese submariners. The film also uses archival footage to recall the events of that night.

In Japan the subject of war is taboo. Rarely do films dealing with these issues have the opportunity to present the other side of the story and over the last 63 years, no one has filmed or presented the Japanese perspective of the attack.

Gonzalez draws out stories from the interviewees as to what their involvement was on that night. He was struck by how much this event meant to them at the time and how it has stayed with them over the years. "They had all taken part in an event that at the time was quickly swept under the carpet but they were left with strong feelings that have never been resolved."

One of the little known incidences that occurred after the attack was the funeral of the dead Japanese submariners on Tuesday June 9, 1941. The Australian military at the time wanted to create an act of goodwill that would possibly give Australian POWs some leniency with their captors in Changi and Burma. Today, some of the Japanese servicemen regard Australia as a very compassionate nation that showed great respect to their war dead at a time when that sort of act was unthinkable.

"There are Sydney Harbour tours that can give you many of the historical details in this documentary, but for most Australians much of the information here will be new. On May 31, 1942, six Japanese infiltrated Sydney Harbour in three midget submarines. While they all died in the attack, some of their comrades and family are interviewed here, as are harbour patrol officers and survivors of the HMAS Kuttabul, which was sunk after a torpedo missed a nearby US warship. It's clear that Sydney was completely unprepared and very fortunate that the results were not worse. The night before the attack a Japanese seaplane flew over the harbour and it is chilling to hear the pilot recall seeing no blackout, all lights on at the airport and a seemingly carefree attitude prevailing below. Thankfully, the film isn't at all flag-waving or nationalistic. The path chosen by the director, Claude Gonzalez, is that of quiet, thoughtful remembrance, respectful to both sides and filled with the sorrow that such events naturally cause. Most moving is the comment from a Japanese man about the deep impression left on him when he heard our government had given his countrymen a naval funeral and sent their ashes home to Japan." - Judy Adamson, TV Previews, The Sydney Morning Herald.