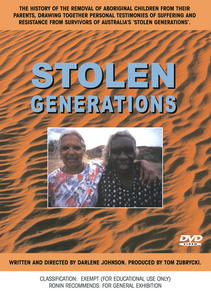 Between 1910 and 1970 in Australia, 1 in 3 children were removed from Aboriginal families and placed in institutions and foster homes. These children, in most cases, were never to see their family again.

The film tells 3 stories of Aboriginal people who were removed:

Bobby Randall
- a singer/songwriter, recalls the traumatic experience of being placed in a mission dormitory at the age of 4. He describes the experience of 'shrinking' emotionally. Bobby spent 9 years searching for his mother and eventually found out she had died soon after he was taken.

Cleonie Quayle
- a mother of four, remembers at the age of 5 being enticed into the back seat of a large black car. She thought she was going off for a holiday, waved to her mother but all she could see were tears in her eyes. Cleonie spent the next 12 years in foster families where she experienced sexual abuse. Her mother later died an alcoholic. Cleonie's story is one of courage and survival.

Daisy Howard
- a Kimberley woman, was separated from her half-sister May fifty years ago. Daisy was removed to a cattle station where she worked as a domestic, and later to a mission where she eventually married, while May grew up in the bush with her parents. The two sisters re-unite in the film recalling and comparing their experiences.

The stories are combined with interviews with two well-known Australian historians Marcia Langton and Henry Reynolds who describe the racist assumptions behind these policies. Removing children was a deliberate government policy and the end aimed for was the eventual disappearance of Aborigines as a people. Illustrated with striking archive footage and a first person narration by Aboriginal director Darlene Johnson.

The film ends with the contemporary debate in Australia - how the current Prime Minister John Howard, while recognising past wrongs and expressing his 'regret', refuses to make an official apology and say 'sorry' on behalf of the Australian nation.

Follow this link to view clips from Australian Screen: australianscreen.com.au/titles/stolen-generations/