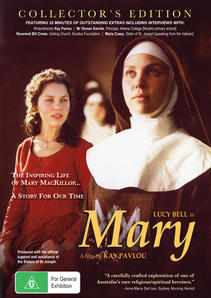 Spanning sixty years, the breadth of Australia and the grandeur of Rome in the late 19th Century, Mary tells the story of one of Australia's greatest battlers.

Born to Scottish migrant parents in 1842, Mary experienced a calling to religious life at the age of 5. By the time she reached her early 20s, Mary was deeply troubled by the plight facing the impoverished lower classes in colonial Australia.

Her love of humanity, a belief that everybody deserved a fair go and an early calling to religious life saw her, with guidance from Father Julian Woods, establish the order of the Sisters of St Joseph.

Dedicated to the education of all people regardless of race, social status or religious belief, Mary's unfailing dedication to her work and disregard for social barriers brought her into conflict with the Catholic hierarchy and resulted in her excommunication from the Church she loved.

Facing the might of a powerful congregation of bishops, she stood alone, rock solid, in her quest for equality for all and the right for her order to answer only to Rome.

After the excommunication was lifted by the dying bishop who originally invoked it, Mary travelled to Rome to put a case for an independent order to the Holy Father.

One hundred years later, the Sisters of St Joseph, the order founded by Mary, continue to bring enlightenment and knowledge to hundreds of thousands of people around the world.