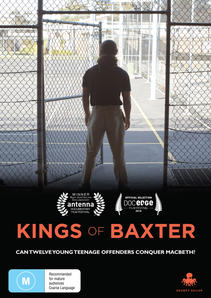 A rare insight into life behind bars for juvenile inmates in one of the country's largest juvenile justice centres: two actors from the Bell Shakespeare company engage with young offenders in an attempt to stage a performance of Shakespeare's Macbeth for their families and fellow inmates.

Kings of Baxter offers a rare insight into life behind bars for young men, and the power of the arts to effect change.

One of Australia's leading theatre companies, Bell Shakespeare, enters one of the country's largest juvenile justice centres. Kings of Baxter explores the challenging and emotional journey of the young offenders and their teachers as they attempt to stage a performance of Shakespeare's Macbeth for their families and fellow inmates.

Frank Baxter Juvenile Justice Centre on the NSW Central Coast accommodates around 120 males aged 16 to 21, convicted of offences that include robbery, assault and murder. The film explores life on the inside for these young men as they embark on rehearsals of one of Shakespeare's most celebrated plays.

Through intimate interviews and fly-on-the-wall filming, witness the anxiety and the crises of self-confidence, the idiosyncratic senses of humour, the machismo, and the raw honesty of the young men who will be taking to the stage. As the boys (all of whom choose pseudonyms - Cosi, Mullet, Hamilton and Fit) tackle some of Shakespeare's most famous lines, glimpse some of the realities of prison life, crime and rehabilitation.