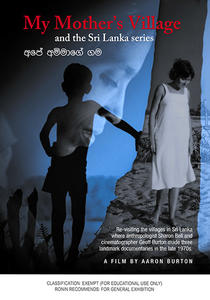 This DVD contains all four films in this remarkable Sri Lankan cycle:

In this journey back to the sites of his parents' work, Aaron Burton meets people who appeared in the original films and discusses with them their perspective on the films and their lives since that time. It is also at another level a poignant reflection by the filmmaker on his mother's research and his father's art as photographer. (2014, 95 mins)

DANCERS WERE ONLY ALLOWED TO DANCE

Traditional Sri Lankan drummers and dancers belong to a low caste. In an effort to break away from caste restrictions, a drummer conducts dancing classes for the children in his impoverished village. He explains the difficulties of low caste existence – difficulties he feels were compounded by the British colonial government. (1980, 51 mins)

Portraits of four women are combined to portray life in a Sinhalese Buddhist village. Rarely given opportunity to express opinions publicly, the women reveal their values, concerns and aspirations with surprising frankness. (1980, 55 mins)

The annual cycle of the tropical monsoons forces this village of Roman Catholic fishermen to abandon their homes and migrate to fishing camps in a distant part of the island. Using traditional methods of net fishing, the fishermen struggle with problem of ever-diminishing catches. With the change of season, they return home and stage a spectacular Passion Play based on the famous Oberamagau performance. (1980, 55 mins)