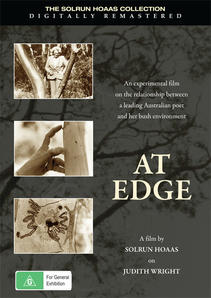 AT EDGE was filmed by Solrun Hoaas in 1978 just after Judith Wright moved to the property 'Edge' in south-eastern New South Wales. As a film poem of a poet and conservationist, AT EDGE communicates a relationship between the poet and her bush environment.

As a visual re-interpretation of the poetry, the film captures the mood and inspiration of the poems. 'Wet Winter', 'Birds', 'Gum Tree Stripping', 'River Bend', 'The Cedars', 'Night' and 'Boundaries' are all read by Judith Wright. Two of these, 'Wet Winter' [later re-titled 'Lichen, Moss, Fungus'] and 'River Bend' were written during the shooting of the film and are included in the volume 'Phantom Dwelling', Angus & Robertson Publishers, 1985.

The filming process allows for a certain candour and expression of Wright's irreverent wit, as well as a self-irony in being a 'personality' exposed to the camera. Comments made by Judith Wright at the time or recording are incorporated into the film through the use of rushes segments, red flashes and numbers at the head and tail of film rolls. These techniques result in a light send-up of the genre of films about famous writers.

"It's the whole flow that's real, the whole change pouring through the lens of eyes ..." - from 'Boundaries'.