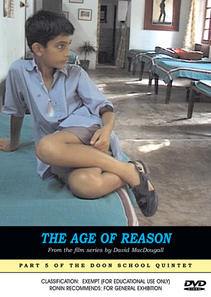 In this fifth and final film in his Doon School Quintet, filmmaker David MacDougall focuses on the life of one student at Doon school, an all-boys academically selective boarding school in Dehradun, Uttarakhand, India.

THE AGE OF REASON was made in parallel with THE NEW BOYS and intersects with it at several points. However, instead of looking at the group, it explores the thoughts and feelings of Abhishek, a 12-year-old from Nepal, during his first days and weeks as a student at Doon school, an all-boys academically selective boarding school in Dehradun, Uttarakhand, India.. This is at once the story of the encounter between a filmmaker and his subject and a glimpse of the mind of a child at 'the age of reason'.

"It was a remarkable decision to end the Doon School series with this portrait of one child, after having moved progressively closer to it in the earlier, more collective and group-oriented films. The Age of Reason demonstrates once again how respectful MacDougall is of his young subjects in all of these films. This peculiar tact is rare in representations of children's lives and can teach other filmmakers much about ethical concerns and awareness. Here Abhishek, the 12-year-old from Nepal, seems in fact to invite MacDougall to share the actual moments of his emerging self-awareness, as a child becoming a responsible adult. We follow the formation of his patterns of sociability, his emerging agency as a growing adolescent encountering new rituals and social constraints, his personal discoveries, and the processes by which he learns. Never seen simply as an "assimilated" subject, Abhishek shares with the filmmaker, and with an attentive audience, the building up of a particular way of 'reasoning' in the world - as it occurs, and in context." - Rossella Ragazzi, director of the film La Mémoire Dure.

"I loved it... elegantly shot, understated, nudging the boundaries between observation and authorial engagement." - Michael Renov, Professor of Critical Studies, University of Southern California; editor of Theorizing Documentary and author of The Subject of Documentary.