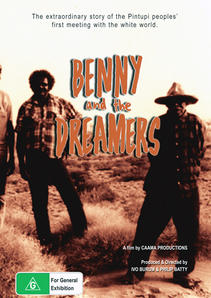 The extraordinary story of the Pintupi peoples' first meeting with the white world.

A small group of Pintupi living in west Central Australia today can remember their first meeting with a white man, their first impressions of the white man's world and their expectations of what the white world had to offer.

BENNY AND THE DREAMERS reveals for the first time on film the Australian Aboriginal peoples' version of their first contact with white culture which was to change their traditional way of life forever. For some it was a terrifying experience, for others a fascinating view of a world which made little sense. But for all Aboriginal people, white contact brought the end of a nomadic way of life which had lasted for at least 40,000 years.

In BENNY AND THE DREAMERS, Benny Tjapaljarri and other Pintupi elders tell their stories of life before and after "whitefellas". Through the use of rare archival footage, their journey is recreated from the central western deserts to their transformation from traditional nomad in a hunter gatherer society to sedentary consumer of white flour and sugar.

Through dramatic retelling of the stories, BENNY AND THE DREAMERS weaves its way into the nightmare of assimilation that became Papunya, the killing fields of alcohol, to the eventual rejection of European life and the return of Aboriginal land at Kintore.

HERE'S MY HAND: A testimony to an Aboriginal Memorial