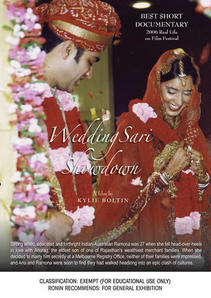 Strong willed, educated and forthright Indian-Australian Ramona was 27 when she fell head-over-heels in love with Anurag, the eldest son of one of Rajasthan's wealthiest merchant families. When she decided to marry him secretly at a Melbourne Registry Office, neither of their families were impressed, and Anu and Ramona were soon to find they had walked headlong into an epic clash of cultures.

WEDDING SARI SHOWDOWN is a lighthearted story with a serious issue at its heart. While the documentary follows Ramona and Anu as they struggle to maintain their relationship and their independence against the ever-increasing pressure of family obligations and cultural expectations, it also questions the very essence of what it means to belong to two cultures and just how far one is prepared to compromise.