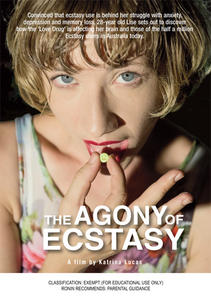 While ecstasy may have positive connotations - we call it the love drug, hug drug, happy pill, eccy, essence, candy and disco biscuits – its effects can be deeply disturbing. When ecstasy first hit mainstream Australia in the late 90s / early 2000s, a major UK survey showed that ecstasy users were 25 percent more likely to suffer a mental health disorder than the rest of the population.

Despite such warnings, ecstasy steadily gained in popularity until a massive worldwide shortage in 2011 affected the availability of the drug. Now ecstasy use is on the rise again and in Australia is the most common illicit drug of choice after cannabis. According to the 2014 UN World Drug Report, Australians are the biggest users per capita in the world, with one in ten people over the age of 14 having tried it. This means thousands of young Australians could experience anxiety, depression, mood disorders or significant memory loss from taking ecstasy. What kind of impact is this having on our society?

Like many of her generation, 28-year-old uni student Lise experimented with ecstasy when she was younger, taking up to four pills every weekend for about two years. She had heard about its detrimental effects on serotonin in the brain, but like all her friends she was having too much fun to care. Then the lows between the highs began to last much longer and were darker than ever and her moods fluctuated wildly. After a period of crippling anxiety and agoraphobia, Lise eventually lost her grip on reality and was rushed to the psychiatric ward in hospital, where she was diagnosed with psychosis and then clinical depression.

After several months of intensive psychiatric treatment and counseling, Lise felt stable enough to enroll again at university, determined to pursue her passion for poetry and linguistics. But she's now worried her Ecstasy use may not only have triggered a possible life-long struggle with mental illness, but also caused other long-term damage, particularly to her memory and capacity for learning.

Determined to get some answers to help her understand the lasting impact of Ecstasy, Lise tracks down other former and current users on the street, a detective, psychologists and scientists. She also decides to reveal her past drug use to her mum who, until now, had no idea Lise had taken so much Ecstasy years before.

According to the National Drug Strategy Household Survey, around half a million people are believed to take 'E' every year in Australia, yet there has been very little research into what it does in the brain. Lise visits a lab at Sydney University and discovers that animal studies have shown the active ingredient of ecstasy – MDMA – can seriously damage some neurons. But does this evidence apply to the human brain and particularly her own?

To find out if she has suffered any long-term damage, Lise gets her brain tested at the Adelaide Brain Clinic, which involves a cognitive test and measurement of her brain's electrical activity, with the aim to have her results compared with the average for females her age. She also decides to have her motor function skills tested as part of a scientific study into the long-term effects of Ecstasy use on movement.

Her test results are unexpected and disturbing, and Lise is forced to dig deeper into her past and confront the true reasons for her Ecstasy use. As a member of the 'E' Generation, can it ever be 'happily ever after' for her? Were all those fleeting moments of euphoria on E really worth it? And would she do it all again, knowing now the price she's paid?