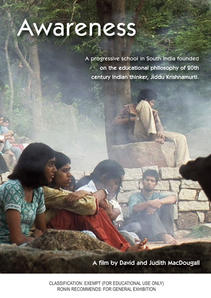 Filmed in South India at the progressive Rishi Valley School, founded by the 20th Century Indian thinker Jiddu Krishnamurti, Awareness explores the sensibilities of two groups of young Indian teenagers - a group of girls in their dormitory, and a group of boys in theirs - as they live out their daily experiences at the co-educational school. The two groups were filmed separately by David and Judith MacDougall over a period of several months.

The film highlights gender differences at a critical stage of adolescence and demonstrates how Krishnamurti's encouragement of each individuals' awareness is played out at the school. With humour and attention to the processes of learning, the film provides an insight into education at one of the leading progressive schools of the Indian Subcontinent.

This intimate and illuminating documentary continues David MacDougall's examination of education and adolescence at the Rishi Valley School (see also two companion films, Some Alien Creatures and the award-winning SchoolScapes, in the Ronin catalogue).