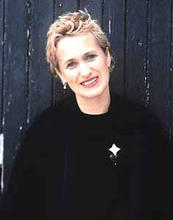 Campion was born in Wellington, New Zealand. She graduated in Anthropology from Victoria University in 1975, and with a painting major at the Sydney College of the Arts in 1979. She started making films in the early eighties at the Australian Film Television and Radio School.

Her first short film, Peel (1982) won the Palme D'Or at the 1986 Cannes Film Festival, and other awards followed for the shorts Passionless Moments (1983) and Girls Own Story (1984). Sweetie (1989) was her feature debut, and won international awards. Further recognition followed with An Angel at my Table (1990), an autobiographical and psychological portrayal of the poet Janet Frame. International recognition followed with another Palme d'Or at Cannes in 1993 for The Piano, which won the best director award from the Australian Film Institute and an Oscar for best screenplay in 1994. At the 66th Academy Awards, she was the second woman ever to be nominated best director.

The Audition (1989) Dir: Anna Campion
Short film directed by her sister, featuring Campion and her mother Edith, who is auditioning for a role in An Angel at my Table. (In the finished product, Edith plays the high school English teacher Miss Lindsay, who gives a rousing classroom recitation of Tennyson's Excalibur that enthralls Janet.)