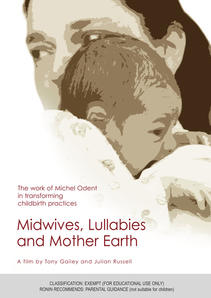 Odent's story begins in a hospital in the French market town of Pithiviers. For 20 years he ran its maternity unit and became famous for his unorthodox techniques. He created private, intimate birthing rooms, with no visible medical equipment, where, squatting or standing, women actively gave birth. He also introduced a birthing pool, at a time when technology and drugs were being increasingly used elsewhere.

During this period, Odent started to move away from the medical establishment. He began to see birth not only in medical terms but also in social terms: how babies are born reflects the fundamental values of any society. His work led him to ask what the long-term effects on a child might be as a result of the birthing experience. A Swedish colleague, Professor Bertil Jacobson, researched the birth experience of teenagers displaying self-destructive behaviour, including addictions and suicidal tendencies, and found a clear correlation between traumatic birth (including drugs at birth) and later problems.

Traditions of lullabies in many societies have also been lost through the clinical approach to birth and early childhood. Odent believes that all women have "a profound need" to sing to their babies, and at Pithiviers, and later in London, he organised groups for mothers and babies to re-build confidence in singing lullabies.

As the film explores, midwives were once powerful members of society but the priority increasingly shifted after the 17th century in Europe towards male-dominated technological forms. During the 20th century, the shift to medicalised hospital births accelerated, and in the 1950s society's faith in science led to the adoption of almost universal hospitalised births and a high proportion of Caesarean sections in Western societies.

Made for the 1993 ABC/Channel 4 series VISIONARIES: small solutions to enormously large problems, this valuable portrait of Odent and his work is now returned to wide circulation for the first time since its broadcast.

"A lovely production...The birth scenes are extraordinary...an interesting eye-opener for many health professionals and a morale booster for midwives...an enjoyable viewing experience for anyone who shares the subject's enthusiasm and affection for babies, mothers, and the miracle of birth."
***** (5 stars) Video Rating Guide for Libraries (USA)