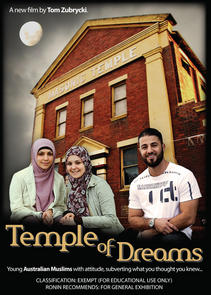 Fadi Rahman is one of a new breed of Australian Muslim leaders. Young, charismatic and politically ambitious, he runs a youth centre/gymnasium in Sydney's west in what was once a Masonic Temple. The Centre struggles in the face of council planning regulations and funding shortfalls. Fadi sets out to solve all their problems with the help of three determined but often argumentative young women – Alyah, Amna and Zouhour.

First up to raise funds he flies out former rap star, turned born-again Muslim, Napoleon. Next, he and his trusty team organise a youth conference to discuss the problems young Muslims face in Australia. This event is much bigger than anything they've attempted before, and the stress is taking it's toll. Meanwhile the Council deadline is looming, with the threat of closure imminent.

Will the Conference succeed? Will the Centre survive? This is a story told from the inside revealing Muslim Australians in a way that dispels stereotypes of a vilified and victimised minority

Follow this link to view clips from Australian Screen: australianscreen.com.au/titles/temple-dreams/