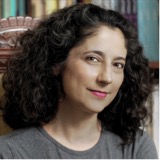 Karen Pearlman writes, directs and edits screen productions and she writes about screen culture and creative processes. Karen is a director of the multi-award winning Physical TV Company, through which she has developed, produced, directed or edited numerous highly acclaimed short films, online and mobile productions, and produced and edited the ATOM Award winning short feature "Thursday's Fictions". Her recent period drama short, "Woman with an Editing Bench", won six awards including an ATOM Award for Best Short Fiction Film and a Australian Screen Editors Guild Award for Best Editing in a Drama – Short Film. Her earlier documentary "...the dancer from the dance" was a finalist for an Australian Dance Award for Outstanding Achievement in Dance on Screen, and also a finalist for an ATOM Award for Best Arts Documentary.

Karen is a lecturer in Screen Production at Macquarie University, and she held the post of Head of Screen Studies at AFTRS for 6 years. She is a four-time finalist for best editing in the Australian Screen Editors Guild awards and the author of "Cutting Rhythms, Intuitive Film Editing" (Focal Press, 2016). Karen previously edited "Performing the Unnameable: An Anthology of Australian Performance Texts" (Currency Press/RealTime) and has published academic essays and articles in the "International Journal of Screendance", "Participations Journal of Audience Research", "The Journal of Performance Studies" and other anthologies and journals. Before taking up filmmaking, editing and film studies, Karen had a distinguished career as a professional dancer - performing on the Opera House stages of the world and directing two dance companies. She holds a Doctorate of Creative Arts from UTS, two Masters degrees, and a BFA in Dance from NYU Tisch School of the Arts.