WOMAN WITH AN EDITING BENCH 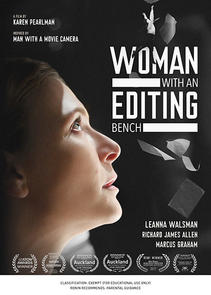 Inspired by a true story, Woman with an Editing Bench pays homage to the creativity of Elizaveta Svilova - the unsung editor behind Dziga Vertov's 1929 documentary masterpiece "Man with a Movie Camera" (No 1 on the 'Sight and Sound' list of Best Documentaries of all time). It uses her revolutionary editing techniques to reveal her thoughts and recuperate her legacy in the history of cinema.

Woman with an Editing Bench is about sustaining creativity and fighting repression. In 1930s Russia, Dziga Vertov and Elizaveta Svilova make radical, groundbreaking films. Stalin, threatened by their innovations, wants his henchmen to suppress them. Vertov, unhappy and artistically constrained, is inept at working with the bureaucracy. Svilova knows how to work the system laterally and from behind the scenes - as all great editors do. She is also adept at working with Vertov's mind, understanding what he wants to say and how he wants to say it. Svilova's editing makes Vertov's genius possible. Vertov's eccentricity makes Svilova's editing genius indispensable.

"A BEAUTIFULLY REALISED AND BRILLIANT HOMAGE TO SVILOVA AND A CELEBRATION OF THE ART OF FILM EDITING" - Lawrie Silverstrin, ASE, Australian Screen Editors Guild Newsletter.

"Woman with an Editing Bench does more than reclaim a piece of cinema's founding story: it aims to understand editors' broader role in the process of co-writing and producing films. ... Where (the film) differs from most other new short films is that it also qualifies as an original contribution to scholarly thought, having been produced through Macquarie University's Creative Ecologies Lab, a haven within the academy for around 20 artist-scholars working in dance, performance, music, creative non-fiction and film."

For the full article, see: www.realtime.org.au/woman-with-an-editing-bench-how-do-film-editors-think/