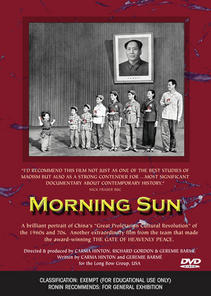 Few events of the twentieth century have so dramatically engulfed such a large proportion of humanity as China's "Great Proletarian Cultural Revolution". Millions suffered and untold others died, yet the Cultural Revolution remains only barely understood. There is little agreement on when it began (1964 or mid-1966), how long it lasted (three years, 1966-69, or a decade, 1966-76), what it was about (culture, revolution, power struggles, or Mao Zedong's monomania), or what it achieved (a true Marxist-Leninist revolution, the prelude to the reform era, or was it just a meaningless period of political zealotry and chaos?).

MORNING SUN brings to vivid life this tumultuous and extraordinary period through the eyes of the generation that came of age in the1960s, charting for viewers the psychological and emotional topography of high-Maoist China. It also examines the films and plays, the music and ideas, the rhetoric and the ideologies at the heart of this story about a new revolution that attempted to remake revolution itself.

MORNING SUN was made by the same formidable team that brought us the highly acclaimed THE GATE OF HEAVENLY PEACE (1996), a comprehensive in-depth survey of the Tiananmen Square incident also available from Ronin Films. The team includes Carma Hinton, who was born and raised in China and experienced the Cultural Revolution at first hand as a teenager and young woman, Richard Gordon, producer and cinematographer of numerous films on China, and Geremie Barme, who also encountered the Cultural Revolution as a young student, and is a much published author and commentator on contemporary Chinese politics and culture. With Hinton's Harvard doctorate in art history, and Barme's extensive research and writing on all aspects of the intellectual history and cultural expression of modern China, they bring a particular depth to examining the "cultural" dimension of the Cultural Revolution, which counterpoints the testimony of their interviewees.

"I'd recommend this film not just as one of the best studies of Maoism but also as a strong contender for ...most significant documentary about contemporary history." - Nick Fraser BBC.