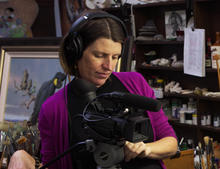 After completing her degree in Landscape Architecture Sarah left Australia on her trusty bicycle to explore the remote corners of the world. The outcome of one of these early trips was her first broadcast documentary "Cycling Mongolia" which received a pre-sale from Channel 7 for World Around Us. She was Co-Producer, Director, Writer and Camera.

From 2001 Sarah worked in the editing and post-production area of reality TV gaining a broad range of contacts in the industry. She worked on shows such as "Big Brother," "I'm a Celebrity Get Me Out Of Here" and "Missing Persons Unit" among others.

A change of pace saw her move north to the Tablelands town of Yungaburra, not far from Cairns. She has been working on a multitude of smaller scale projects as well as television documentaries including: "Chopper Rescue" Series 1 & 2, "Jenny the Bat Lady" and "Mysteries of Shark Coast".

With a mobile camera kit and edit suite, Sarah has travelled widely through Cape York and the Torres Strait as well as central Australia working for various organisations that required her skills.