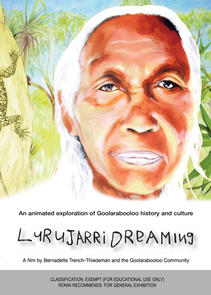 Four years in the making, this animated film documents the Song-cycle of the Goolarabooloo people, along the path of the Lurujarri Heritage Trail which was established in 1987 by Goolarabooloo Elder Paddy Roe, and stretching from Broome up through the Dampier Peninsula.

Embellished with live action scenes, still photographs and interviews, the film is a rich collage that brings Goolarabooloo Dreamtime stories, history and culture to life. The film is narrated by Brian Councillor, Paddy Roe's great-grandson, and by other family members. Paddy was Brian's teacher about Country and heritage, and the film is a great tribute to Paddy's vision for recording and preserving the community's culture and for sharing it with Indigenous and non-Indigenous people alike.

The Heritage Trail, a nine-day walk, follows the path of the Goolarabooloo Song-cycle. The trail is important today for the Goolarabooloo people – to come together and spend cultural time in Country, to sing their songs and pay respects: this was Paddy's vision. Along the way, we hear stories told by Elders, children, women and men about their vision for reconciliation and caring for Country.

Today, the Goolarabooloo people are fighting to protect their Song-cycle from mining proposals and inappropriate developments. In early 2013, Woodside Petroleum abandoned their plans for an LNG Precinct at Walmadany (a location along the Heritage Trail), but the Western Australian State Government is attempting to compulsorily acquire the land and open it up for massive industrial development despite the efforts of Goolarabooloo and other community groups calling for the protection of the Song-cycle and the Lurujarri Heritage Trail. This fight is on-going (in 2013-4) in the courts, media and on the ground. (The story of this struggle is also depicted in the documentary HERITAGE FIGHT available from Ronin).