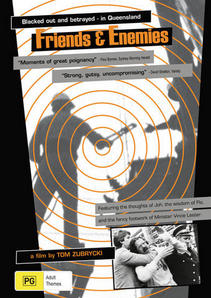 In February 1985, over a thousand electrical workers went on strike against the introduction of contractors into Queensland's Electricity Board. The Premier, Sir Joh Bjelke-Petersen, reacted by calling a state of emergency and sacking 1,002 workers. Soon after, he rushed through parliament some of the harshest anti-union legislation seen in Australia for over 50 years. The film's director, Tom Zubrycki, spent many months following the main protagonists in these events. The resulting film is a chilling portrait of strong, colourful characters locked in a struggle where the stakes are the future of unionism itself.

FRIENDS AND ENEMIES is about strategies, tactics and backroom deals. The story swings between two opposite extremes: Vince Lester, the National Party Minister in charge of the dispute, takes us on a crusade of country fairs, schools and debutante balls, as he spreads the gospel of anti-unionism and free enterprise. Meanwhile, the union office is a radically different world. There, Bernie Neville, a nuggety rank and filer, fearlessly confronts his own union officials and the Queensland Trades and labour Council. Nothing stands in his way, especially when he fears a sell-out around the corner.

FRIENDS AND ENEMIES is history as it happened. Its remarkable portrait of a watershed episode in Australian labour relations is seen from the perspective of ordinary workers and their families, whose story might otherwise have been unrecorded. Through their struggle against betrayals and oppression, the film achieves an importance that extends far beyond the details of the moment. Reverberations from the conflict continue to be felt in national politics, and will do so for years to come.

Follow this link to view clips from Australian Screen: australianscreen.com.au/titles/friends-and-enemies/