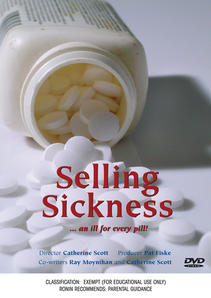 SELLING SICKNESS looks at the growing global controversy around SSRI antidepressants and follows British psychiatrist, Dr David Healy, patients and their families as they rock the scientific establishment with accusations that aggressive drug marketing is blurring the boundaries between medical conditions and ordinary life with potentially deadly consequences.

The documentary explores the intensifying conflict over the very nature of illness itself and tracks the sophisticated ways in which pharmaceutical companies market their drugs. In 2002 drug companies spent close to $US3 billion in the United States on direct-to-consumer advertising. One of the world's leading antidepressants, Paxil, manufactured by GlaxoSmithKline (GSK), greatly expanded its markets by promoting the drug for a for a range of new psychiatric conditions. Shyness is thus transformed into 'Social Anxiety Disorder' (SAD), constant worry has become 'Generalized Anxiety Disorder' (GAD) and premenstrual tension is now 'Pre Menstrual Dysphoric Disorder' (PMDD). Throughout the film we return to drug marketer and industry insider, Vince Parry, who explains the intricacies of how to "brand a condition" or define what an illness is in order to create and expand the market for a drug. There is now an ill for every pill.

Amidst the hustle and bustle of a medical conference, we move along the scientific installations and product display stalls. Company sponsored doctors like Jack Gorman and Murray Stein discuss the latest medical theories and treatments for various anxiety disorders, including SAD. Vince Parry emphasizes the importance of fostering relationships between 'thought leaders', doctors and patient groups who advocate on the behalf of consumers in disease awareness campaigns.

Patients, Harry and Deb, had never heard of social anxiety disorder until they saw the TV ads for Paxil. Deb diagnosed herself with SAD and started taking the drug because she was getting nervous at job interviews. She now joins a great urban flight where hordes of grey-haired citizens from the USA cross the Mexican border to buy more affordable drugs. As Deb walks along a colorful strip of drug stores with Mexican touts spruiking for customers, she explains how she now cannot live without Paxil. Deb and Harry join thousands of patients in a massive nationwide lawsuit against GSK for failing to warn about the harmful potential withdrawal syndrome. Their stories are intercut with Dr David Healy who now travels the world speaking out about the potential risks of these medicines, concerned that a decade of mass marketing has transformed once rare conditions into modern epidemics. Healy is also alarmed about potential links between Paxil, other SSRI medications, and suicidal behaviour in a small but growing number of patients particularly adolescents.

Parents convey the stories of Caitlin and Julie who not long after beginning on their SSRI medications began to display an adverse reaction that resulted in both of them taking their own lives. Caitlin was twelve years old when she hung herself with her own shoelaces in the school bathroom. The parents were told that the drugs Paxil and Zoloft were the new wonder drugs - safe and effective. They were never warned that these medications can carry potential danger for some patients. We join David Healy, patients and families as they travel to Washington to testify in an official hearing at the Food and Drug Administration (FDA) where the SSRI antidepressant drugs are being reviewed for adolescents.

Not long after the FDA Hearing in Washington, the New York Attorney General wages a landmark lawsuit against GSK who stand accused of committing fraud by concealing facts about its popular antidepressant Paxil. Healy contends that until the raw data from the company sponsored clinical trials are available to independent public scrutiny marketing will continue to corrode science.