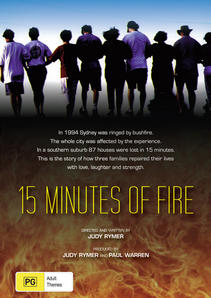 One quiet suburban street in south Sydney faced total disaster. Fire swept through the street at 1250 centigrade. Half the residents of the street were made homeless in a matter of minutes as their solid brick homes exploded, their contents reduced to ash. Many people lost everything they owned.

For a week they were the focus of world attention. Then the media went away and the nightmare of rebuilding their lives began.

FIFTEEN MINUTES OF FIRE is a frank and revealing portrait of how ordinary people cope with adversity and loss and follows closely the lives of three families for two years after the fires.

FIFTEEN MINUTES OF FIRE is also a testimony to a way of life in Australia that we are constantly being told is long gone. In this street the neighbours not only knew each other, they were great friends. Their kids were mates, all of them still live happily at home into their teens and twenties. This was a community where people genuinely cared about each other. This is a rare and intimate story about the true meaning of loss and how these people went about the physical and emotional reconstruction of a neighbourhood.