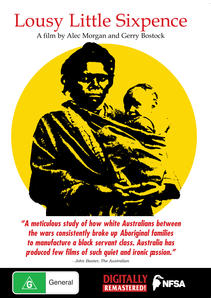 DIGITALLY RESTORED by the NFSA as part of the NFSA RESTORES program, in association with AIATSIS.

In Australia in 1909, in the state of New South Wales, the Aborigines Protection Board planned to break up Aboriginal communities by forcibly removing their children and hiring them out as servants to white employers.

The title of this powerful documentary comes from the wages that were to be paid to the children. Many never saw that "lousy little sixpence".

In the mid-1930s, Aboriginal people began to organise, and to fight the Aborigines Protection Board. Through old newsreels, archive film, photographs and interviews with Elders, the film weaves a moving account of a hidden history, the early struggle for Aboriginal land rights and self-determination.

"A meticulous study of how white Australians between the wars consistently broke up Aboriginal families to manufacture a black servant class. Australia has produced few films of such quiet and ironic passion." - John Baxter, The Australian.