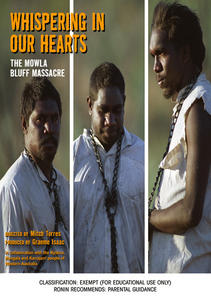 The story of the 1916 massacre of Aboriginal people at Mowla Bluff, Western Australia, told in interviews with surviving Nyikina, Mangala and Karajarri peoples, as well as through dramatised re-enactments of the testimonials of Aboriginal witnesses.

An Aboriginal community from Australia's tropical north-west tells the story of the execution of family members at Mowla Bluff in 1916 by police and local pastoralists. They return to the area where the killings took place to ceremonially put to rest the spirits of their dead. As we travel back with them to Mowla Bluff, on the edge of the Great Sandy Desert, the film intertwines the oral account of tribal elders (whose parents were alive at the time of the events) with white archival records from the period.

Dramatisation of Aboriginal eyewitness statements, along with police records from the time, help to conjure up the often brutal frontier world in which the killings took place.

WHISPERING IN OUR HEARTS is a film about an Aboriginal community reaching back into the past in order to come to terms with its own history. The film's Indigenous director, Mitch Torres, is related to the community and the story of their emotional journey back to Mowla Bluff is given a powerful personal dimension by the filmmaker.