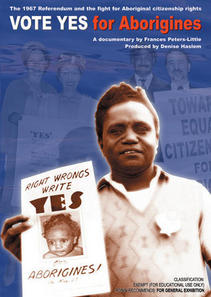 While many people believe that the 1967 Referendum gave Aborigines the right to vote, in fact the Referendum removed two sections of the constitution that discriminated against Aborigines. With the highest YES vote in Australia's history, 90.77% of voters agreed that Aborigines be counted in the census and that the Commonwealth Government take charge of Aboriginal affairs, effectively acknowledging Aboriginal people as citizens within their own country.

Aborigines had fought for citizenship rights for over a century but it was the coming together of the many Aboriginal associations and leagues in 1958 to form a national body that finally gave impetus to the struggle. The Federal Council for the Advancement of Aborigines and Torres Strait Islanders or FCAATSI attracted both Aboriginal and non-Aboriginal membership and support from across all sections of Australian society.

For ten years they campaigned to convince the public and politicians of the need for Constitutional change. They capitalised on the global condemnation of Australia's treatment of its Indigenous people and the media's growing interest in Aboriginal issues. The "Freedom Rides" of 1965 and the Gurindji strike at Wave Hill in 1966 highlighted Aboriginal living and working conditions and helped advance the crusade to set things right for Indigenous Australians.

VOTE YES FOR ABORIGINES revisits those involved with the 1967 referendum and the social attitudes and influences that led to the event, featuring former Prime Ministers, politicians, historians and campaigners.

More than just marking a time in history, VOTE YES FOR ABORIGINES interrogates the success of the Referendum and addresses current debates about what is meant by Australian citizenship and values and how they relate, if at all, to Aboriginal history, identity and culture.

"The referendum was a point that gave incredible uplift and joy to Aboriginal people right across this country. In that sense we did gain something from it. But if you looked at it from that point on, I just say that we never took another step forward." Dr John Maynard, 2006.

"A FILM EVERY AUSTRALIAN SHOULD SEE." Canberra Times