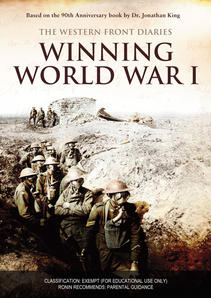 WINNING WORLD WAR I is a moving adaptation of the landmark book, The Western Front Diaries, written by historian Dr Jonathan King to commemorate the 90th Anniversary of the end of World War I. Dr King presents this little-known story of the role of the tough-fighting Australians in the winning of World War I.

The ANZAC's Western Front campaign had a greater impact than Gallipoli in almost every aspect: five times more soldiers served and were killed there, more than five times as many battles took place, and it was there that an astounding 52 Victoria Crosses were awarded to Australians. This feature-length film recreates the Australian contribution to some of the most famous battles of the war, such as Fromelles, Pozieres, Ypres, Passchendaele and Amiens.

The Diggers helped win the war on the Western Front, but it was at an almost unfathomable cost. The film uses eyewitness accounts written by soldiers and nurses who actually experienced the war in the trenches. Their private letters and personal diaries report the action, battle after battle, as the Australians fought their way to victory against impossible odds. Their reports are illustrated with black and white archival footage and rare photographs, and also emotional tales from descendants of the Diggers - sharing memories of fathers, grandfathers and great uncles who served in battles, were either killed or wounded, or returned home physically and mentally scarred. The film also explores the actual battlefields of the Somme in France, as they are today, to bring history to life.

Dedicated to the 46,000 Australians killed on the Western Front and the millions of soldiers of all nations who made that supreme sacrifice.

Made with the assistance of Screen Australia and The History Channel, assisted by the Department of Veterans Affairs.