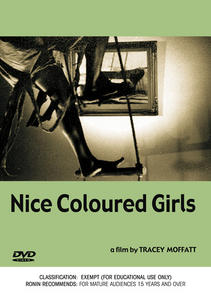 An early short film classic by Tracey Moffatt, one of Australia's foremost visual artists. This stylistically daring film audaciously explores the history of exploitation between white men and Aboriginal women, juxtaposing the 'first encounter' between colonisers and native women with the attempts of modern urban Aboriginal women to reverse their fortunes.

Three Aboriginal women cruise through Kings Cross and pick up a 'captain' (a drunken white man). They encourage him to spend his money on them and to drink until incapacitated while they steal his wallet and race off to catch a cab.

Nice Coloured Girls contrasts the relationship between Aboriginal women and white men in the past and present. The film juxtaposes contemporary images of black women taking advantage of a white man with a voice over of extracts from early journals of white settlers and sailors, in order to question the validity of conventional white history and to deny the image of Aborigines as passive and powerless.

Through counterpoint of sound, image, and printed text, the film conveys the perspective of Aboriginal women while acknowledging that oppression and enforced silence still shape their consciousness. The soundscape recalls a rural environment, while the voice-over of extracts from the diary of colonist Lieutenant William Bradley recalls the first settlement.